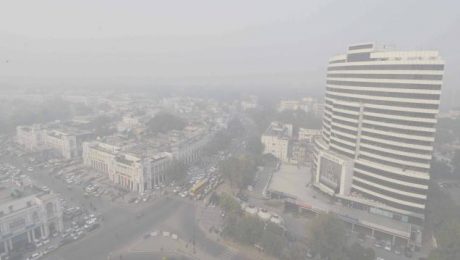 Delhi High Court has responded to the government, the city pollution panel and civic agencies of the national capital on the issue of air pollution here which it has taken up as a public interest litigation (PIL).

A bench of justices Badar Durrez Ahmed and Sanjeev Sachdeva issued notice to the Centre,

The court took up the issue suo motu (on its own) after it came across news reports that Delhi was one of the most polluted cities in the world with regard to air pollution.

The bench had also come across information that over 50 per cent of children in Delhi suffered from respiratory problem caused due to poor ambient air quality here.

Terming such a situation as “unacceptable” the court had earlier asked DPCC to inform it whether the Supreme Court is looking into the matter of air pollution.

DPCC on February 6 had informed the court that one matter regarding environment pollution, titled M C Mehta, was pending before the apex court, while another petition on air pollution in Delhi and surrounding states is before the National Green Tribunal (NGT).

DPCC had also informed the court that several comprehensive orders have been issued by NGT.

“We have nothing to do with NGT. Can’t leave it to them,” the bench had remarked.

Due to high levels of pollution early in the morning due to trucks and accumulation overnight the pollution level is very high in the morning. It is a serious threat for the upcoming generation and the present children who go to school early morning are having trouble breathing and some are using masks.